Instructions for RV GAP that has a price change based on the amount financed.

For some vendors, RV Gap pricing is based on the amount financed, which changes from the time the GAP is rated on the layout page to when you are processing contracts after selling products.

When attempting to generate the GAP contract, you will get an error similar to this:  [-3000] {GETRATES0014} Financed Amount is greater than Maximum Financed Amount of $75,000.00.

To fix this issue, you can simply rerate the GAP product from the forms page.

To do this, click the blue "Contract" button next to GAP.

Then click the "Rate" button on the right hand side of the screen. 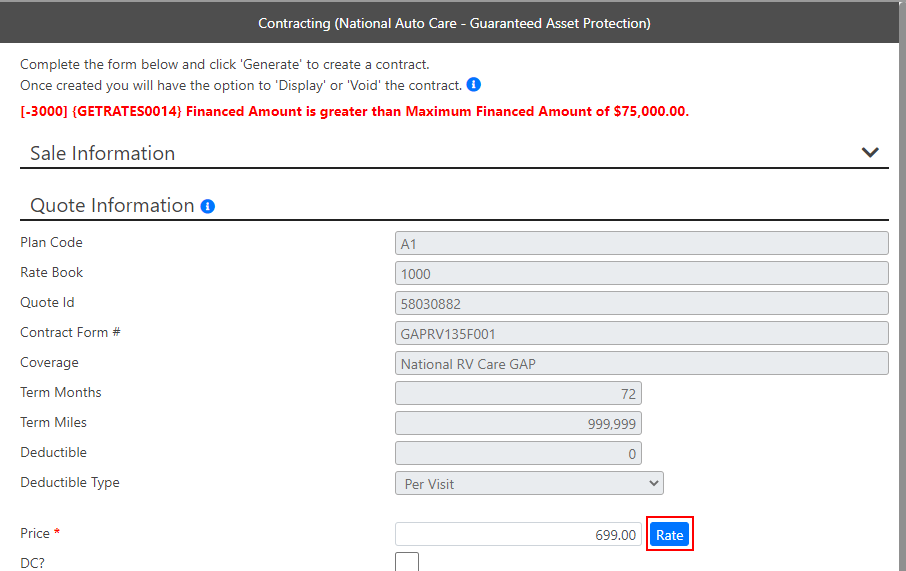 In this case, the rates that will be displayed are the rates for an amount financed of LESS than $75,000.  To get the appropriate rates, click the "Get Rates" button.

This will send a new rating request to your vendor with the updated amount financed, which is now over $75,000 in this example.

Once new rates have returned, click the blue plus next to the option you want to select.

The window will then shrink and you can click "Generate" to process your contract.

Your contract will now be generated and you can proceed with your deal.